And now for the latest post from the Terrific Girlfriend. It’s a topic that I approve of whole-heartedly, even if I do think she shortchanges ol’ Flopsy a little at the end there…

As you may (or may not) have noticed, Wezenlandia has been taken over by Doctor Who.

I used to watch this series religiously when I was a kid at the encouragement of my father (who was also a big Doctor Who fan). I loved the series SO much that I used to pretend that our yellow toy chest was the TARDIS and tried in vain to time travel in the back yard. I’m pretty sure I was trying to go someplace that had an amazing assortment of candy as well as an epic swimming pool.  I forgot about it for a couple of years only to watch the TV movie in 1996. I have a special place in my heart for the TV movie and Paul “My Thumbs Have Gone Weird” McGann. It was the last Doctor Who that my father and I shared because he passed away later that year.  I saw a few episodes of the reboot but didn’t commit to it because it wasn’t something that I could watch on a regular basis until we acquired BBC America, iTunes, and Netflix. There was no going back after that.

There is a certain amount of similar romanticism in both Doctor Who and baseball. You can get involved in all the timey-wimey sci-fi numbers aspects of both or look at the more humany wumany aspects. Either way, they’re escapism at it’s best and I think that’s why people love them both so much and why they are the best that humanity has to offer itself. Sure, people make the ‘return to your youth’ argument, but I think they’re each really about the willing suspension of disbelief that is really healthy.  Plus, there’s a similar level of attachment that comes with, say, your favorite 3rd baseman or Doctor.  There is also a certain level of purism between baseball fans and Doctor Who fans. You have the Whovian fanbase freaking out because the Doctor fell in love with some lady while you have baseball fans giving themselves a stroke about the DH/instant replay/women wearing pants/when it was a REAL game/blah blah blah…

With that being said, I thought to myself, “what is the nerdiest thing that I could possibly do that involves both Doctor Who and baseball?” That nerdy thing, of course, is figuring out which version of the Doctor would be best at each position on the field (and in the front offices). Now, keep in mind that these are only suggestions; if you disagree, be my guest.

Oh, for those not in the know, the Doctor is from a planet called Gallifrey and is a Time Lord. If you have any other questions, that’s what the interwebs are for. (Ed.’s note: Or you could watch the show – because it’s excellent.) One last disclaimer, it should be noted that this information was taken from Wikipedia and edited accordingly. I have also given them nicknames, because everyone in sports has a nickname. Nicknames are cool. 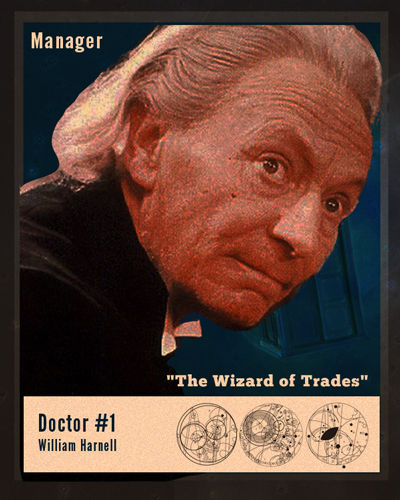 William Hartnell described the Doctor as “a wizard”, and “a cross between the Wizard of Oz and Father Christmas”. This version of the doctor has been described as grandfatherly. True; I wouldn’t describe Ben Cherington or Theo Epstein as grandfatherly, but I might Doug Melvin. Maybe it’s the mustache and sweaters. 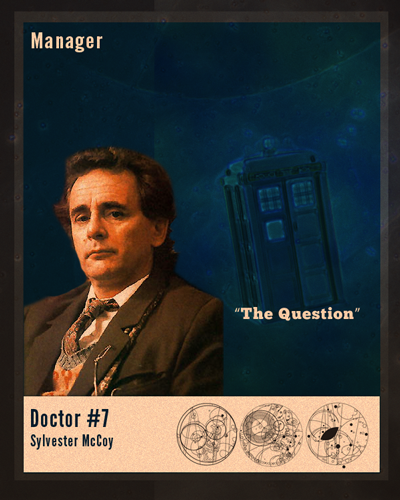 The Seventh Doctor displayed perhaps the most profound change in attitude of any of the Time Lord’s personae, beginning as perhaps the most outwardly amiable and bumbling (to the extent of putting himself in danger, but not at the cost of his overall great intelligence and benevolent intentions) and progressing into a driven, dark gamemaster whose plans to defeat his adversaries, both old and new, would play out across space and time. He generally displayed an affable, curious, knowledgeable, easygoing, excitable and charming air. However, as he began to choose his battles and keep a tighter grip on his secrets – from his plans to his very identity – he also presented more serious, contemplative, secretive, wistful and manipulative sides with undercurrents of mischief and authority, constantly giving the impression that there was more to him than met the eye.

I discovered McCoy rather late in the game and absolutely adore this guy; he even might be one of my favorites of all time. His managerial equivalent might be Joe Maddon and a lesser batshit version of Bobby Valentine, or even Casey Stengel. I’m sure at ‘dark gamester’ you thought, ‘oh, that’s LaRussa’. Yeah, no. Absolutely not. 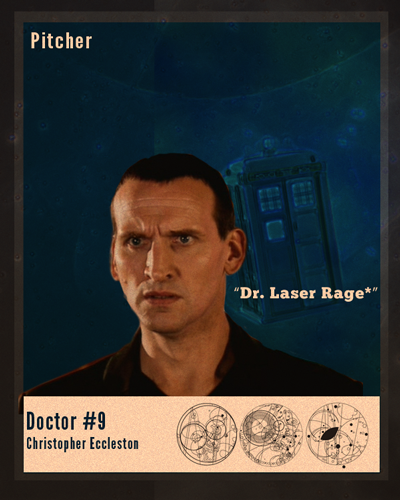 I didn’t make up the nickname Dr. Laser Rage, it comes from the brilliant writers of the Sarah Silverman Program. Eccleston and McGann (Doctor #8) are easily the most accomplished and best actors out of the bunch. Eccleston is also from Manchester so there’s that.

Most gritty, and informal, masking a lonely, guilt-ridden and melancholic personality with a jovial, witty, forthright and almost manic exterior. Did not shy away from using force in situations he would deem necessary. Anyway, you’d want Eccleston and his battery-mate controlling the show. Not really sure of canon here, but I think both fought in the Time War or something. I guess the baseball equivalent to the Time War would be… nothing, unless you had Andy Pettitte and Jorge Posada fighting the war on roids and killing every juicer or something. Basically 8 & 9 kill every timelord because the timelords have gotten too powerful and will wreck the universe.

I’d say maybe the 9th’s equivalent might be Zack Greinke, Jonathan Papelbon, or Brian Wilson – something along those lines. That one is tougher to figure out. 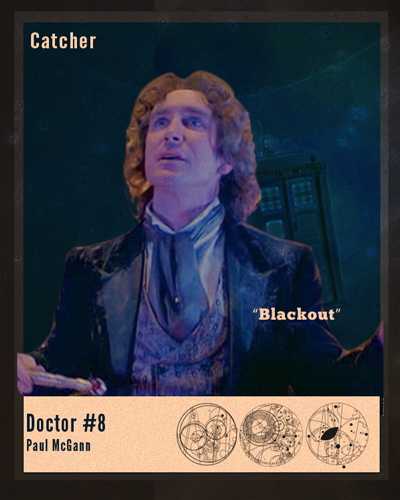 Encouraged those around him to seize life instead of withdrawing from it. He also seemed to enjoy giving people hints of their own futures, probably to prod them into making the right decisions. It is unclear if the eighth Doctor’s knowledge of people’s futures comes from historical expertise, psychic power or precognitive ability. Is prone to forgetfulness. He’s more of a central heroic figure than an enabler, encouraging his companions and other people he meets to act upon their more positive impulses. His sidekick, however, looked like Vida Boheme. Which is too bad because she’s a great female character (one of my big gripes is that Doctor Who is pure shit when it comes to female companions, excluding Sarah Jane and Martha Jones).

I selected the 8th Doctor at catcher primarily because of his ability to control the situation while also being able to detach from the situation. He’s a good Carlton Fisk or Gary Carter. 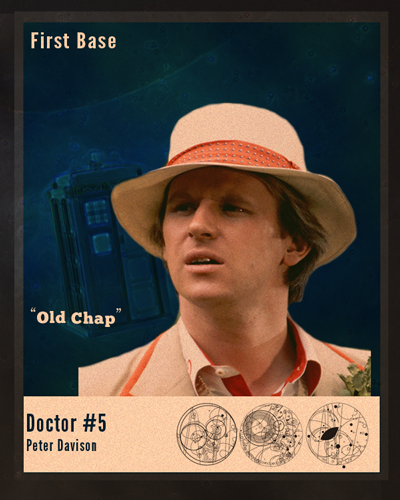 Vulnerable, sensitive, and reserved. #5 treated his young companions as parts of a team, and often willingly participated in situations under the leadership of someone else who had the strong command presence that he apparently lacked. Greatly abhorred violence and often hesitated about taking matters into his own hands

Ah, the 5th. He was one of my first crushes when I was little. Him and Luke Skywalker*. I actually liked him a lot more than Tom Baker after I got over the whole, ‘Doctor Who isn’t BLOND!’ thing. Anyway, he’s a pretty cool one, a little more emo and might be better off at first base. I think he’s along the same lines as Harmon Killebrew and Lou Gehrig.

Scuffy, childlike,  clever. Calculating schemer who would not only manipulate people for the greater good, but act like a bumbling fool in order to have others underestimate his true abilities. Loves hats. Always acted heroically and morally in his desire to help the oppressed. I’d say he’s a Ryne Sandburg or Rogers Hornsby. 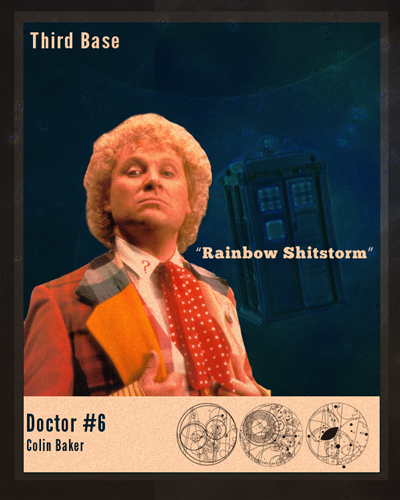 Kind of a twat. Unpredictable and somewhat petulant egoist, whose garish, multicoloured attire reflected his volatile personality. His unpredictability was made even wilder by his mood swings, manic behaviour, bombastic outbursts and glib, unflappable wit. His personality also displayed occasionally fatalistic overtones. He was wicked smart, though.

I feel really bad for Colin Baker. NO one likes this version. I mean, it’s hard to like but really, it’s more the writers’ fault than anything else. Plus, it’s kind of like having to play the villain after Ricardo Montalban’s brilliant turn in “Wrath of Khan”. It’s just hard. The writers of this incarnation were also rubbish, so you really can’t fault him too much for trying.  I align him with Wade Boggs and maybe Chipper Jones. You have to have an aggressive yet slightly psychotic streak to play third successfully. I think in C-Bake’s case, he’s kind of like Kenny Powers. 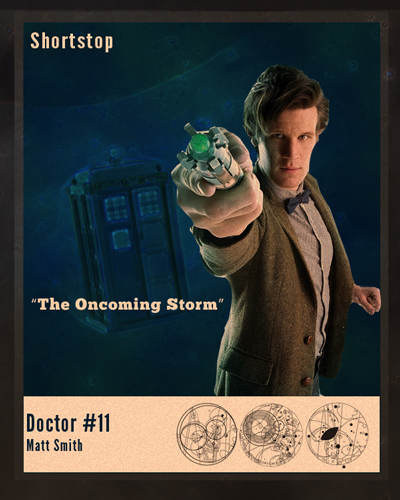 Energetic, eccentric and lively soul who possessed a sense of arrogance and a short temper. While the Doctor was usually cheerful and full of manic energy, traits he shared with his previous incarnation, he also had a darker side and was capable of becoming furious if his loved ones were threatened. Less forgiving and more aggressive than his previous incarnation, showing considerable hatred towards his arch enemies. Notable for his self loathing, claiming that he was “a stupid selfish man” and even saying that he hated himself more than anyone else in the universe.

#11 is the Robin Yount or Cal Ripken of the series. He’s awesome. In the Christmas special, he put a lemonade faucet in a house. Robin Yount makes lemonade. Boom. Honestly, if you put a faucet of Robinade in our home, you’d be my hero. 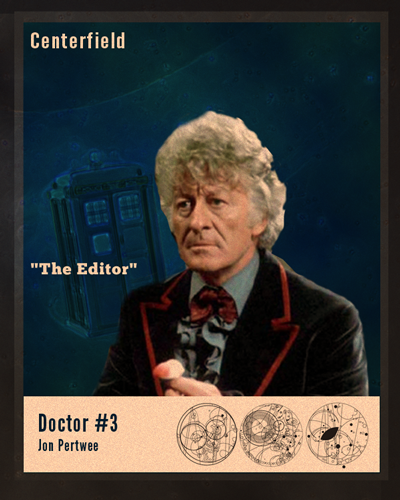 The Third Doctor was a suave, dapper, technologically-oriented, and authoritative man of action, who not only practised Venusian Aikido or karate, but enjoyed working on gadgets and riding all manner of vehicles. Basically a badass.  If this Doctor had a somewhat patrician and authoritarian air, he was just as quick to criticise authority, too, having little patience with self-inflated bureaucrats, parochially-narrow ministers, knee-jerk militarists or red tape in general. He’s kind of like a less dickish Ty Cobb, but I’d say Ken Griffey Jr. is more like it. He seems to be the most Ron Swanson of the bunch. 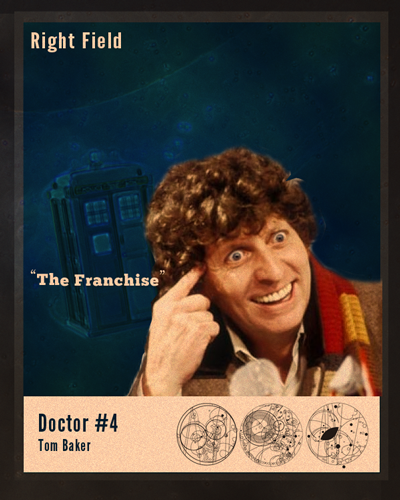 One of the most unpredictable in terms of emotional depth, slightly more distant and alien than his other incarnations. Displayed whimsical charm, offbeat humor, permeated by his manic grin, more aloof and somber than his previous incarnations. He could become intensely brooding, serious and even callous. He’s the dude with the Gali-fro and the scarf.

This is the incarnation that everyone associated with Doctor Who. Same can be said for Tom Seaver and pitching, or something. ANYWAY, in the days of yore known as the 1970’s, when dinosaurs roamed the earth, the BBC syndicated the show to PBS and that’s how most of us came to know this version of the Doctor. Which is cool. I really like PBS.

Famous right fielders include Babe Ruth, Hank Aaron, Roberto Clemente and so on. So, ‘The Franchise’ seems fitting. 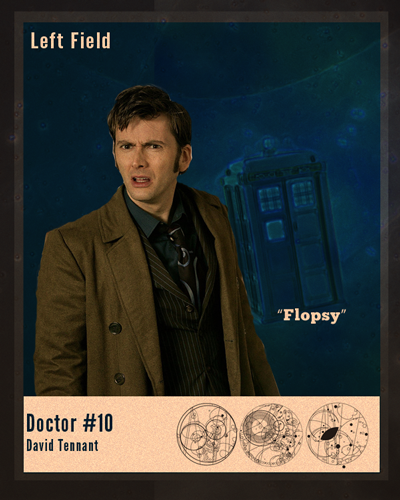 Displays a light-hearted, talkative, easy-going, witty and cheeky manner, but repeatedly demonstrates a vengeful and unforgiving streak as well. Tendency to babble, mixing apparent nonsense with vital information, sometimes acting erratically to put his enemies off-guard. He is prone to making comments that to outsiders seem obtuse or rude, sometimes to his own embarrassment. Describes human beings as both brilliant and stupid in the same sentence while arguing the necessity of emotions.

Also, this guy cries all the time. You’re a Time Lord. You’ve seen shit. Nut up. I’m sure many Whovians would say that he’s the Ted Williams of all the incarnations. Ted Williams didn’t cry though, because Ted Williams is a man.