Using my collection of “The Complete Peanuts”, I’ve done my best to find every baseball-related strip produced and tally up any relevant stats that they reveal. For the most part this means counting wins and losses and documenting any stated scores, though there are a few strips here and there that mention other stats. I like to think of it as “Retrosheet: The Peanuts Chronicles”.

Please see Calculating Charlie Brown’s Wins, Losses, & Other Stats: Intro for more information on how these were calculated, what was included, and what other years have been completed so far.

Notable: Peanuts began its run in October of 1950. In the summer of 1951, when the strip was still young and finding its footing, Schulz ran a few baseball themed strips. None of them focused on team play in the way we’re used to seeing, but they did help set an early table of misplay and misfortune.

The first strip to even closely resemble the ballgames that we would see so much of in later years was published July 10, when Patty – one of the original characters, not Peppermint Patty – socks a home run while Charlie Brown stares dumbfounded from the catcher’s position.

Charlie Brown makes his first appearance as a pitcher on August 24.

Notable: In its second full year, the strip continued to grow into what we saw for most of our lives. The first team-game appears on March 23, when Charlie Brown’s infield single gets nabbed by Snoopy, who successfully runs away from the infielders long enough to almost give Charlie Brown a home run. His bad luck started early.

Charlie Brown continued to start as a catcher more than anything else, though he does make his first appearance on the mound in a team-game on April 12.

Patty also continues to show up on the ballfield every now and then and prove herself to be a monster player. This usually happens at Charlie Brown’s (or his team’s) expense.

Notable: Schroeder finally grows up enough to join the team; he first appears as Charlie Brown’s catcher on April 1.

Scores & Stats: The first example of Charlie Brown’s team actually winning a ballgame happens on April 2 when, after realizing that they were winning the game 83-79, Charlie Brown says that they should “take the ball and run!” On April 19, with Shermy pitching to Charlie Brown, they mention that they’re losing 93-0.

Notable: We’re still pretty early in the comic strip. This year, on April 11, we see the first appearance of the “Charlie Brown ignoring the pouring rain” strips that seem to run every year. It is also the first time we see Charlie Brown and Schroeder going over a complicated set of signals for pitches that Charlie Brown can’t throw.

Scores & Stats: There are no strips this year that give us a score update and there are no strips mentioning either a win or a loss. The closest we get is on April 18, when Patty slugs a home run off of Charlie Brown and he says that she won’t be joining his team because he’s “giving up the game.”

Scores & Stats: More of the same this year. There are no strips giving score updates or mentioning the results of a particular game. Instead, it’s a series of snapshots of a less-than-spectacular ballclub.

Notable: For as bad as Charlie Brown’s team is, he does manage to have some good players. Linus is often shown making amazing catches. On July 15, he makes his first (of many) eye-popping catch, snagging the ball after running through a jump-rope. 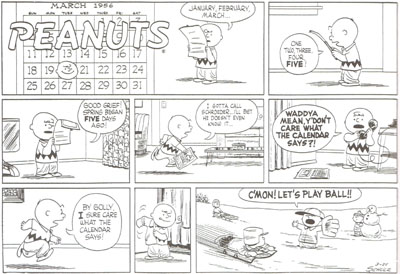 Scores & Stats: There are no scores mentioned during the summer, but, on August 14, the team finds itself playing for the championship – with Charlie Brown representing their final hope. He strikes out to lose the championship, of course, and then spends the next week depressed.

Notable: Snoopy makes his first appearance as a member of Charlie Brown’s team on April 12. This is also the first year that we see an extended pre-season sequence with Charlie Brown as manager. The sequence ends the night before the first game of the season.

Scores & Stats: The only distinct game mentioned this year is that first game of the season. However, no result is given. Instead of playing the game, the opponent takes one look at Team Peanuts and laughs so hard that they walk away. It’s humiliating for poor Charlie Brown, and the best consolation his team can offer him when he says that he feels like he let them down is “Just forget it, we never really had any faith in you!” EDIT: On the advice of others, I’m considering this a forfeit and, thus, a win. In other years, the forfeit is explicitly mentioned, but that doesn’t seem a good enough reason to discount it here.

Notable: For the second year in a row (and for just about every year from now on), we see Charlie Brown manage his team through pre-season practice. This year, however, we’re treated to the first solid stats offered up about the team. On April 24, on the eve of the first game of the season, Charlie Brown mentions his team’s batting and fielding stats for the pre-season. They aren’t pretty.

Scores & Stats: On April 25, Charlie Brown wakes up on that first game of the season to find himself too sick to go to the game. After the game is played, the team shows up in his bedroom to tell him that they’ve won their first game of the season (“We didn’t do anything you told us!”). On June 9, we join a game already in progress. With Charlie Brown pitching, the team is only one out away from winning the championship. As they ponder how exciting that would be, the batter hits a high, high pop-up right to Charlie Brown. The ball lands in his glove, and pops out. The team loses the championship, and Charlie Brown spends the next week wallowing in grief.

Notable: The strip is hitting its stride right about now. Charlie Brown again shows up as manager for some pre-season pep-talks, but there is very little new this year. On July 5, Linus throws back a practice pop-up to Charlie Brown and Schroeder so hard that the two of them are bowled over. It’s the first time someone gets knocked over by a ball like that.

Scores & Stats: After a restless night of sleep by the team and a postponed game due to rain, the team finally plays the first game of the year – and loses, 600-0 (yes, six-hundred to zero). On August 23, Charlie Brown is forced to miss the game that day because he has to walk his baby-sister Sally, who is still in a stroller, around the block. As the game reaches its climax, Charlie Brown rushes Sally back to the house so he can pinch-hit with the game on the line. He strikes out to lose the game.

Notable: The slick-fielding double-play combination of Snoopy at short and Linus at second-base shows up on April 24. This year also shows the team getting more and more comfortable with long and pointless deliberations on the mound – much to the chagrin of Charlie Brown.

Scores & Stats: On May 16, Charlie Brown finds himself on third base with two outs in the last of the ninth with the team down 3-2 and their best hitter coming up. After working up the courage to steal home and make himself the hero, he finally takes off. He slides into a huge cloud of dust to find himself tagged out less than halfway down the third base line. The team loses the game 3-2, with everyone angry at Charlie Brown. He almost resigns as manager, but decides to stay on.

On August 15, Charlie Brown gives up a two-out, ninth-inning grand slam to lose the last game of the season. It is their 20th loss of the season, against 0 wins (though they did almost win a game by forfeit). After the game, Schroeder calculates the following stats for the team: “Last year our opponents scored 3,040 runs to our 6! They made 4,900 hits to our 11 and they made 19 errors to our 300…“

Please see Calculating Charlie Brown’s Wins, Losses, & Other Stats: Intro for more information on how these were calculated, what was included, and what other years have been completed so far. Click here to continue on to the 1960s.