Remember a couple of weeks ago, when everyone was pretending that Derek Jeter might sign with a team other than the Yankees? At the time, someone over at The Beckett Blog took it upon themselves to show the world what Jeter might look like in a different jersey. And they didn’t just throw him in a Red Sox jersey. They also put him on the Dodgers and the Tigers and the Pirates and the Marlins and all 29 non-Yankees teams. It was pretty fun to see.

Well, the same kind of thing is happening to Cliff Lee right now. Except, instead of everyone pretending that Lee is looking at all 29 non-Yankees teams, we keep hearing that Lee is negotiating with a “mystery team”. And the “mystery team” nonsense isn’t quieting down.

Well, just like you, I can’t resist a good mystery. So, I wonder, what would Cliff Lee look like if he were to sign with that mystery team? Click “Read More” to find the answer. UPDATED: Just added a Spanish version of the uniform, just in case the mystery team is from the Mexican League (you never know!).

And the Mexican League uniform: 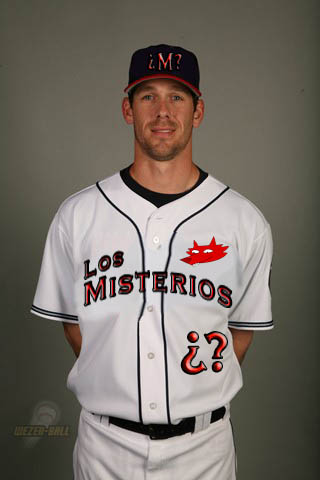