Yesterday afternoon, Milwaukee’s beloved Bob Uecker announced his last Brewers game for at least two-to-three months. The Brewers did their best to keep him in the booth as long as possible, playing 14-innings against the Pirates after Trevor Hoffman blew the save in the top of the ninth inning, but it had to end sometime.

Famous the world over for his roles as the 1980s Miller Lite Guy, the dad from “Mr. Belvedere”, and Harry Doyle, the Cleveland Indians announcer in the “Major League” movies, Bob is best known as the voice of the Milwaukee Brewers, a role he has had since 1971. With the announcement that he would undergo heart surgery on Friday, the state of Wisconsin and baseball fans across the country were shocked and saddened. Thankfully, the procedure is routine enough that the team and Bob’s doctors expect him back for the stretch run. We wish Bob the best of luck and a speedy recovery. He truly is one of the best baseball men in the game, and Brewers games won’t be the same without him.

As a long-tenured radio broadcaster, Bob isn’t exactly unique across baseball. There are still a few teams whose current generation of fans are being raised by the same voice who raised the last generation of fans (and even the generation before that). They are a rare breed, though. The chart below shows a sample of some of the game’s greatest voices, current and recently retired/departed, and how long they’ve been calling games (and points out a few of their career highlights). When you listen to someone like Vin Scully or Bob Uecker, you are truly listening to someone who has seen it all. It’ll be a sad day when the last of these great radio men step down. Until then, let’s appreciate what we have. 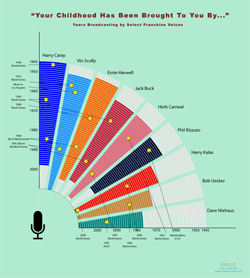