ShareTweet
2009, Yankees over Phillies (click the image for a larger size)

One of the greatest things about the Times is that its entire 150+ years history is available online. Much of it is behind a paywall, but, if you have access to the archives, there’s a ton of information to be found.

I thought it’d be fun, then, to take a look through the Times’ archive to see how the various Yankees’ titles were celebrated. I originally wanted to create a slideshow of all twenty-seven front pages, but that seemed like it might be pushing things a little bit. Instead, I chose a select few to feature here that hopefully show how the front page celebrations have evolved over the last 80+ years. 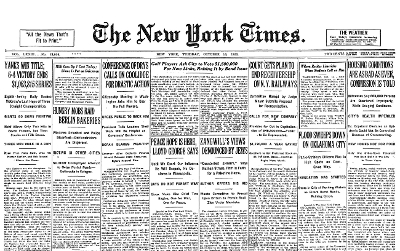 1923, Yankees over Giants (click the image for a larger size)

Here’s the Times’ front page from October 16, 1923, when the Yankees won their first ever World Series. As you can see, the Yanks earn the first column, but nothing more. I’m no newsprint expert, but this tells me that, while the victory was big news, it wasn’t profound – it was not important enough to dominate the front page. Or maybe the technology wasn’t there to expand the article across multiple columns. I can’t say. It certainly seems rather small when compared to what we see today. 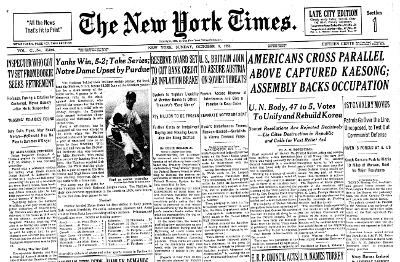 1950, Yankees over Phillies (click the image for a larger size)

Twenty-seven years and twelve World Championships later, the Yankees defeated the Phillies for their third Series title in four years. As you can see, the Times has expanded their feature to cover two full columns and even included a nice action shot of Whitey Ford. This seems to reflect a higher level of interest in the Yankees (which only makes sense, of course), but it still is nothing close to today. 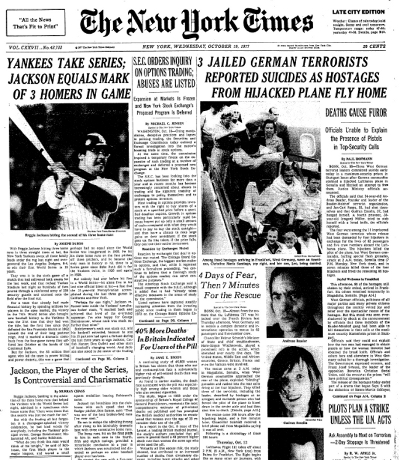 1977, Yankees over Dodgers (click the image for a larger size)

From 1951 through 1962, the Yankees would win seven more championships before going into a funk. Over the next fifteen years, they would go 0-for-3 in the Series. But then 1977 and Mr. October rolled around. Reggie’s three-homers in Game 6 secured the Yankees’ first Series title in fifteen years and landed him a prime spot on the cover of the Times. It’s impossible to say for sure, but you get the feeling that, if not for the terrorists/hostage drama that played out that day, the Yankees would’ve dominated the front-page even more. As it is, they take up a pretty good amount of real estate – much more so than ’23 or ’50. It’s starting to look familiar. 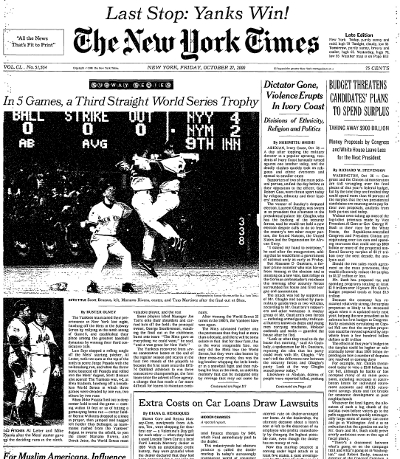 2000, Yankees over Mets (click image for a larger size)

When the Yankees won Game 5 of the 2000 Subway Series, they clinched their third consecutive World Series title and fourth in five years. It was the exclamation point on the franchise’s 1990s dynasty and everyone knew it. Needless to say, it was a big deal. The real estate that they gave the Series on the front page, from the four-column-wide victory hug to the smaller picture of a dejected Mike Piazza, is remarkable, and it says a lot about its importance. This is the kind of thing that we expect to see in this day and age, but it was a long time coming. I don’t imagine it’ll ever regress, but it’s hard to say. Maybe we’ll appreciate simpler things in the future…

Make of this little exploration what you will, but I think this evolution of front page celebrations clearly shows two things: the growing importance of both major league baseball and the Yankees to New York fans, and the country’s steady progression of how we consume our news, from a dense, varied view in the early-’20s to a more streamlined, local viewpoint today. It certainly makes for a nice presentation, though. It’ll be interesting to see how the Times’ presents the Yankees’ future titles in the next twenty-seven or fifty years.