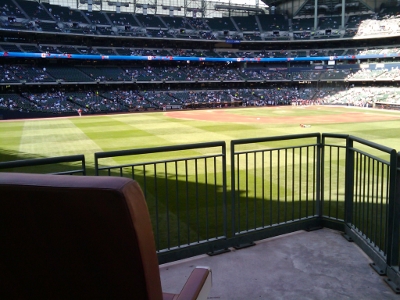 Last New Year’s Day, the Terrific Girlfriend and I were having lunch and a drink at a bar downtown after a good workout that morning. Marquette was playing Villanova in their Big East conference opener and we were decked out in some gold t-shirts as we watched the first half on one of the tvs. As we finished up our beers and our sandwiches at half-time, the manager came up behind us and said, “You two look like Marquette fans. How would you like to use the owner’s seats for the rest of the game?”

We looked at each other with a certain glee in our eyes and quickly said yes. We took the tickets and ran over to the Bradley Center. The tickets said “Row AAA”, which sounded great, but we weren’t prepared for just how great they were. It wasn’t until the usher showed us to our seats that we completely realized where we were: we were sitting in the front row, just behind Villanova’s bench. It was a truly awesome spot to watch the big Marquette victory, and a fantastic way to start the year.

And 2009 proved to be a great year. True, the Brewers played terribly in the second half and failed to return to the playoffs, but there was a lot more to the year in sports that made it one to remember. Here are a few of my highlights from the calendar year:

Those are some of the key highlights from my year in sports. I could name others, I’m sure, but the list is long enough as it is. Like I said, it was a pretty great year. It might be hard for 2010 to top it, but I can sure try. Did anyone else have any great moments this year like these? What was the best moment in sports for you this year?
ShareTweet