A couple of weeks back, Esquire published an article by Charles Pierce called “The Smartest Man in Baseball is an Idiot“. It received a fair amount of attention around the internet when it was published. In essence, the piece argued that, while highly regarded as one of the best and brightest managers in baseball, Tony La Russa has been nothing special in the postseason and, thus, he is not worthy of all the praise that he gets. The article has plenty of flaws – it doesn’t give much analysis and it’s filled with personal attacks and insults that leave no illusion about the author’s feelings – but the crux of his position did start an interesting debate.

At websites that discussed the article, like Baseball Think Factory and Circling the Bases, the conversation seemed to center on two points-of-view: either the author is right because, although La Russa owns two World Series rings, he has not done enough with all of the talent that he’s been given over the years, or, the author is wrong because the playoffs are just a crap-shoot and anything can happen in a short series (or five), no matter how great your team is. There wasn’t much room for compromise between those two sides.

After reading the debates, I began to wonder if there was any way to measure or check these points of view. It occurred to me that my newly purchased Rally’s Historical WAR database might be just the thing. By measuring the Total WAR values for each of La Russa’s (and other managers’) ballclubs, we could get a sense of just how much talent he had to work with. Was the average Tony La Russa team comparable in talent to the average Earl Weaver team, for example? Casey Stengel? What about their World Series winning teams – how do they compare?

We could also look at a select group of “winning” managers and compare their career arcs. Is it true, as some claim, that La Russa won less with the level of talent he was given than others? How often do great managers take full advantage of the players they are given?

With those questions in mind, I set to work on the Rally WAR database. For every manager in history, I tallied the total WAR values of the players that played on each of their teams. I then calculated a few values that I thought were interesting: the highest, lowest, and average WAR values for his squads, the number of World Series wins and losses, and the number of MVP-caliber seasons his hitters and pitchers put up over the course of his managing career (MVP-caliber = 7.0+ WAR). Here, then, are the top ten managers with the highest average WAR per team (ten years managing or more):

It should be noted that partial manager seasons (ie, when a manager either replaces or is replaced by another manager mid-season) are not distinguished from full seasons. For all the managers named below, these partial seasons do little to affect the overall data. I did not check any other managers, though, so I can’t say how they’re affected by partial seasons.

But I didn’t want to stop there. The table was useful, but it couldn’t illustrate everything that I was hoping to convey. So I took a small subset of those managers – I tried to choose both all-time greats and more contemporary managers who would be considered La Russa’s main competition – and graphed them by total team WAR. The graph below shows the total WAR values for these select managers, ranked from the highest total value to the lowest (I stole that idea from the WAR graphs over at Beyond the Box Score). Click on the graph to see it full size.

The graph is a little hard to read in those first ten or so years, but, if you look close, it begins to clear up. The top-most lines – Torre, McGraw, and Weaver – tell us that those three had the best teams on a consistent basis (and the fact that McGraw’s line is higher than everyone’s at just about every point shows you just how good those teams were). That makes La Russa’s line all the more notable. Of all the managers shown on this graph, La Russa is the one with the worst top-three seasons. It isn’t until you get to his 4th- through 8th-best seasons that any of the others drop below his line. For someone whose biggest critics say that “he hasn’t done enough” with the talent given him, it’s quite interesting to see that “the talent he was given” is less than many others.

But let’s look a little deeper at some of these managers. If Joe Torre or Sparky Anderson have such better talent to work with on a consistent basis, why do we remember them as great managers? 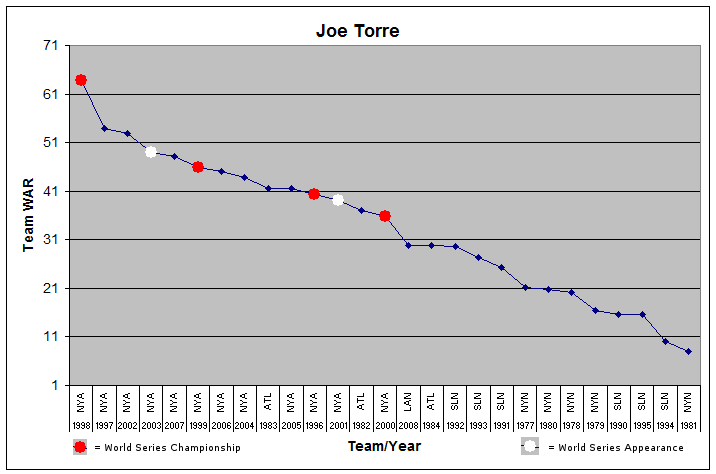 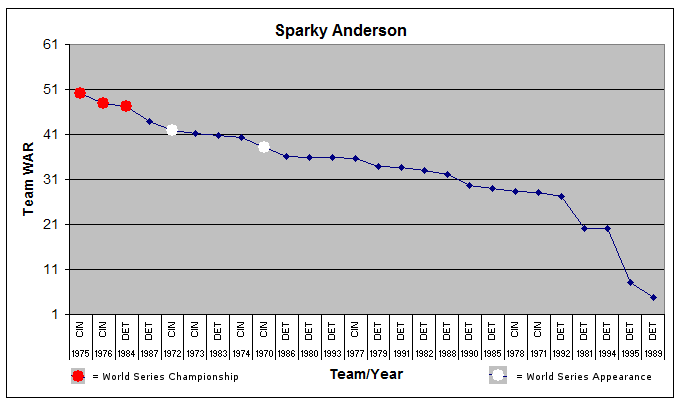 Joe McCarthy (who is not included on the main graph above): 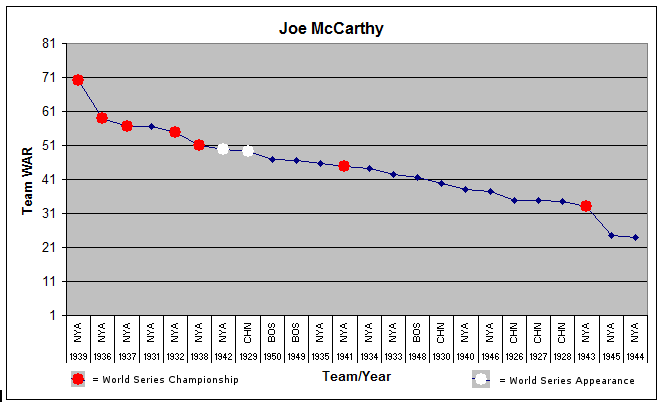 The red dots on these graphs represent World Series victories, while the white dots show World Series losses. The common thread between these three graphs – and the main reason these three are remembered as great managers, I believe – is all that red on the left of the charts. These are three managers who, when they were given an historically great team, got the job done. Not only were they able to take these great teams to the World Series, they were also able to lead them to the title. 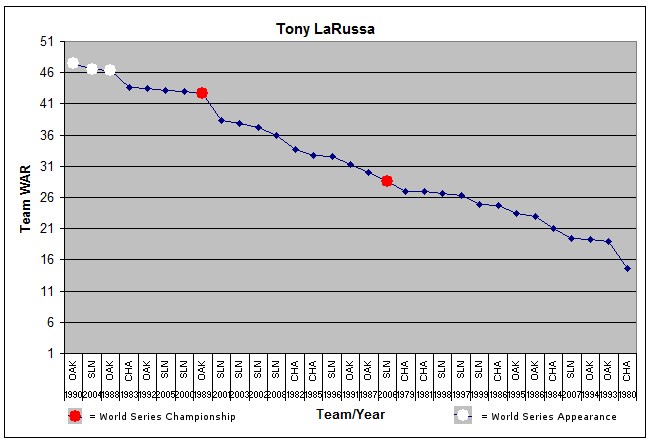 That’s a lot of white on the left of that graph. With La Russa, the feeling seems to be that he hasn’t been able to do enough with the talent that he’s had. You can really understand why some people say that when you see this chart. Yes, he has two World Series titles, but he’s also lost three others – and those three losses all came while he was managing historically great teams. I can only imagine the kind of things that people would be saying about him today if he was sitting around with five rings…

So is that fair? Is La Russa an anomaly in the history of managers, or are there others who had a hard time winning with their great teams? I compiled information on a few other managers (I expanded the list of eight above to about 17) to get a better comparison. You can see that table here, or view the corresponding charts by clicking the links below.

As you can see, the track record of elite managers when it comes to taking their historically great teams all the way to the championship is a little spotty. There are certainly the Stengel’s and Anderson’s of the world, who seemed to win every time they had a great team to work with, but there are also the Bobby Cox’s or Whitey Herzog’s or John McGraw’s, who had a hard time of it. Tony La Russa may have had a hard time winning the big one with his greatest teams, but it hardly makes him unique in that regard. We only think he is because we remember those losses so vividly.

When I started this study, I was on the fence about La Russa and his place in history. If I had to come down on any side of the argument that was brought up in the Esquire article, I probably would’ve agreed with the author that Tony just hadn’t done enough with the talent he was given to be considered a genius. But after looking at all this data – the fact that La Russa’s average team WAR has been middle of the road and that he is hardly alone in losing the big one with the best teams – I have to change that opinion. I don’t know if he’s a genius or not, but you certainly can’t count his postseason failures against him. That’s just the nature of being a manager. (His hairspray, though?… 😉